Can you please introduce yourself briefly? How long have you stayed in Turkey? here do you live in Istanbul?

Hey, my name is Benedict, I study business administration in Bayreuth, a small city in Germany. I have been to Turkey for 5 months, studying at Marmara University. I’ve been living in Beyoglu/Cihangir.

Tell us why do you prefer to attend Erasmus in Turkey?

When I started my Master, I decided to learn a third language and my choice was Turkish. As a logical result I applied for Erasmus in Istanbul, because it’s is, in my opinion, by far the most interesting city in Turkey. I also was interested in Turkey by itself, since the country is a meeting point of different cultures.

What about your thoughts before coming to Turkey?

To be honest, I didn’t waste too many thoughts, because I already decided 2 years ago, that I wanted to go to Istanbul.

Did you undergo culture shock in Turkey?

Of course cultures are different, but I already was aware of that Turkey was not going to be like Germany, so I had no real shock actually. Especially Istanbul is a real western city, so it was easy to adopt.

How was your first week in Turkey and in the university?

I arrived two weeks before the start of the semester to have time to explore the city by my own. I had already organised my flat in advance, so I had no real trouble when I arrived in Istanbul. The first two weeks were easy, getting to know and enjoying the city. The first week of the university was a bit chaotic, since you didn’t get any real information in advance and had to sort things out, when you were in the university.

What do you think about education facilities in Marmara University?

I have to admit, It was better that I’d expected, so I was kind of surprised that the facilities are more or less the same like in Germany.

“Professors took themselves the time to interact with the students..”

When comparing two universities’ academicians, are there any differences in terms of their approaches to students?

The idea of the academic standards is that there should be the same level of education, no matter where you are. Nonetheless Master classes seem to be on a more personal level in Turkey, due to the smaller amount of students, that is what I really enjoyed. Professors took themselves the time to interact with the students, which is pretty rare in Germany, at least in the field of business administrations.

How do you find the courses you take during the program?

To be honest, in some master classes I had to listen to things, which were taught in the first two semesters of the bachelor in Germany, implying that the academic standard/expectations are not equal and thus it was sometimes a bit boring. On the other hand I don’t want to complain about it, since I didn’t have to put too much effort into it.

Can you communicate effectively with local people? How did you manage to solve the language problem?

In Germany I had 4 Turkish language courses, so I was able to communicate on a fairly basic level. But even if there was a language barrier, most local people I got to know, tried to communicate with me in every possible way, including different languages and gestures just for the meaning of a sentence.

Did you get used to the transportation system of the city and the place you stay in terms of accommodation?

Adapting to the infrastructure of Istanbul was pretty easy, you can’t do much wrong with the IstanbulKart. Sure sometimes there was an overwhelming amount of buses, but the drivers were kind and helpful if you asked them if the bus is the right one or not. My accommodation was also fine, for sure, more extravagance is always nice, but I guess for the central location, I got a fair deal for my money.

“Turkish people are in a way more open-minded and curious about new people.”

Can you tell us some cultural and social differences between your hometown and the place you live in details?

Sure, the easiest one to name is being on time. In Turkey it is not uncommon to leave the house at the point of time, when you wanted to actually meet. This behaviour would be regarded as rude in Germany, but since everyone in Turkey is doing it, it seems to be fine for all. Another point is, that Turkish people like to talk a lot. You meet someone for the first time and they talk with you, like you two would know each other for years. German citizens are less communicative in general. Maybe Turkish people are in a way more open-minded and curious about new people.

“I do love Menemen so much! Having a good Menemen was a good start of the day. “

What do you think about Turkish cuisine?

I do love Menemen so much! Having a good Menemen was a good start of the day. I do like the Turkish cuisine! With all the Mezeler a stay in the restaurant can become very long, and  if you are there with friends, the good time gets extended! All in all I can only say good things about the Turkish cuisine, but sure I also like the German one.

How is the city in terms of living conditions as an Erasmus student?

Istanbul is a little expensive city, no doubt about that. Luckily with the decreasing Turkish Lira, life became more and more cheaper for European students. But even after my stay in Turkey, it is still hard to tell for me, if sth. is expensive or not, especially for Turkish people.

“Since Turkish people are generally open-minded it is fairly easy to socialise and to chat with them.”

What do you think about the social life in Istanbul?

Since Turkish people are generally open-minded it is fairly easy to socialise and to chat with them. Nonetheless it feels, like you are sometimes a bit excluded, because you have no idea about social norms and traits.

How is the social life in the university campus?

Due to the small groups in the classes it was pretty easy to get to know the other people and then social life at the campus started with drinking tea in the cafeteria.

“The city offers the possibility to explore something new every day” 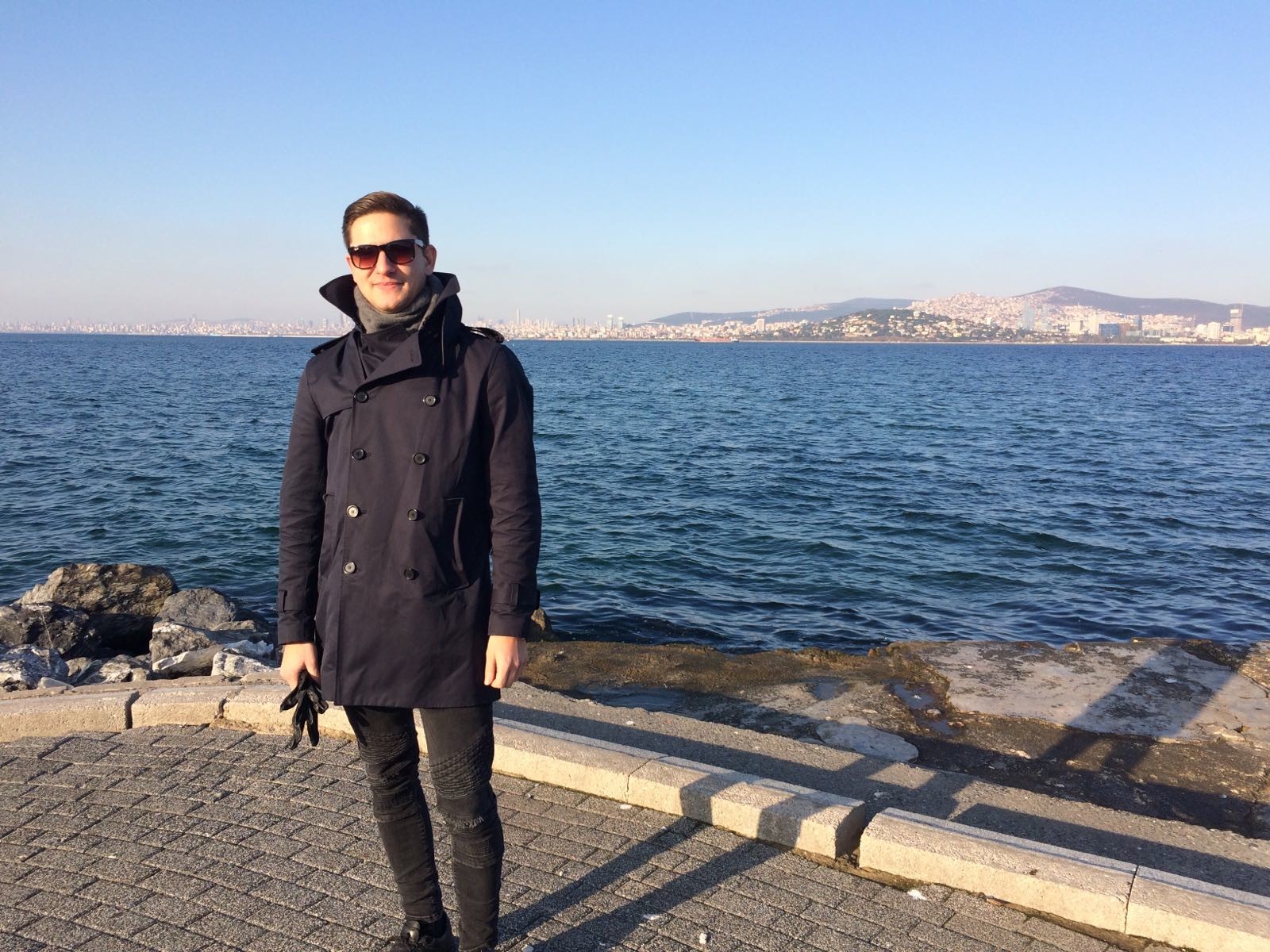 “Out of all the small things, the big picture of Istanbul is made of.”

How is the city for sightseeing?

I was a bit surprised, but within two days, you can show your visitors the main attractions. This is pretty fast for a city with 18 million people. However, the city offers the possibility to explore something new every day and out of all the small things, the big picture of Istanbul is made of.

How is the nightlife in Istanbul?
Turkish nightlife seems to be different from German nightlife. In Turkey people enjoy going to a pub with live music and maybe start dancing there. In Germany, people are going to a pub to drink and move later on to a club. As a result, the pubs in Turkey were quite good and nice so far, but I was disappointed from the clubs in general. Sure there are some hidden gems, but in general most of the clubs are not really recommendable, since they are “low-standard” in Germany. 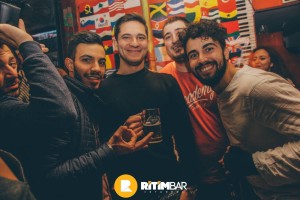 ” I personally would claim, that I’ve seen a lot from Istanbul, but in such a huge city it is hard to prove so. “

Which cities and places have you visited in Turkey so far?

To be honest, not too many. I had a lot of visitors from Germany, who came to Istanbul over the weekend. The other weekends I had to write term projects in the library.  Therefore I only visited Cappadocia with the Erasmus Student Network. But on the other hand I personally would claim, that I’ve seen a lot from Istanbul, but in such a huge city it is hard to prove so. 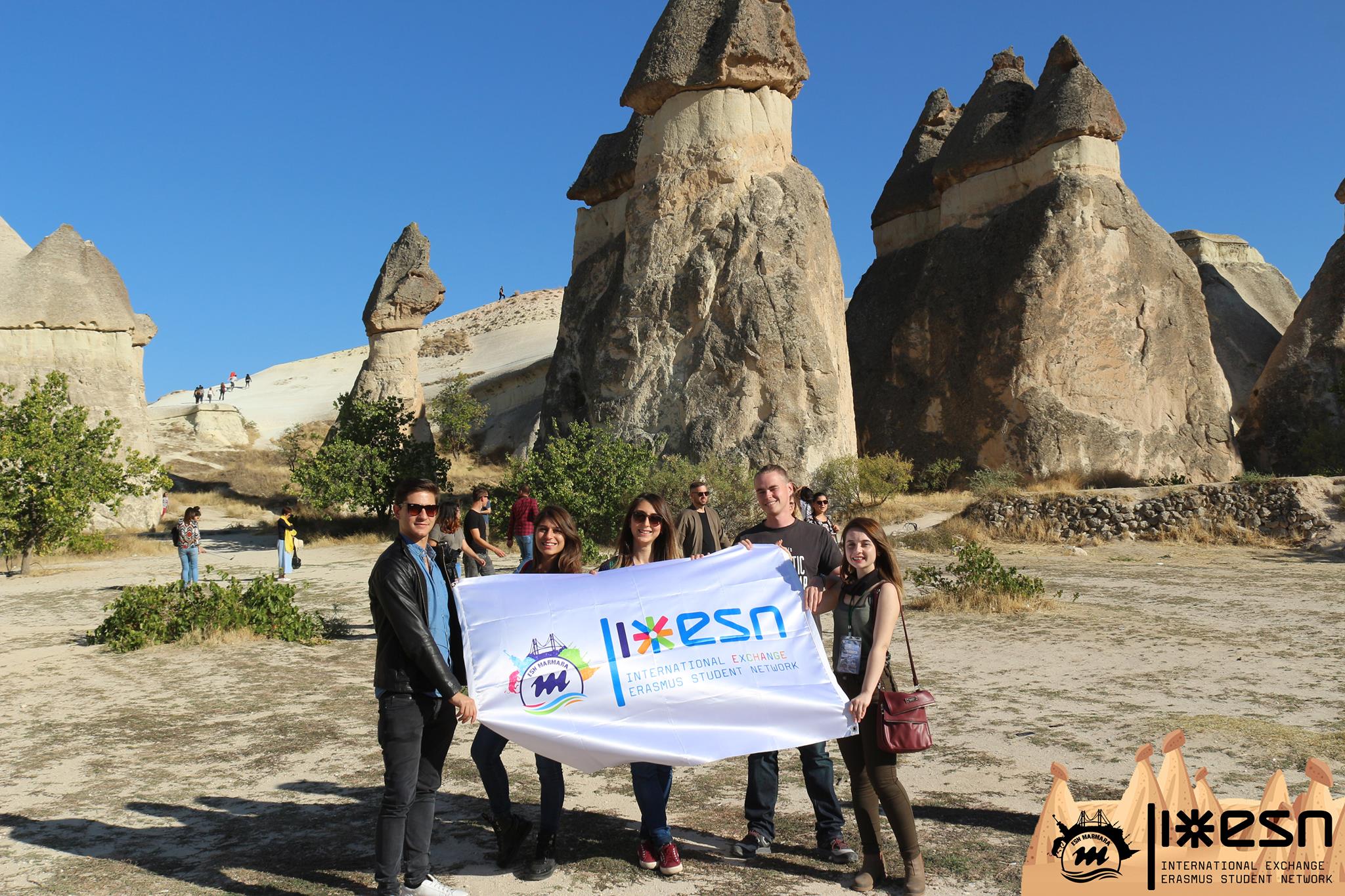 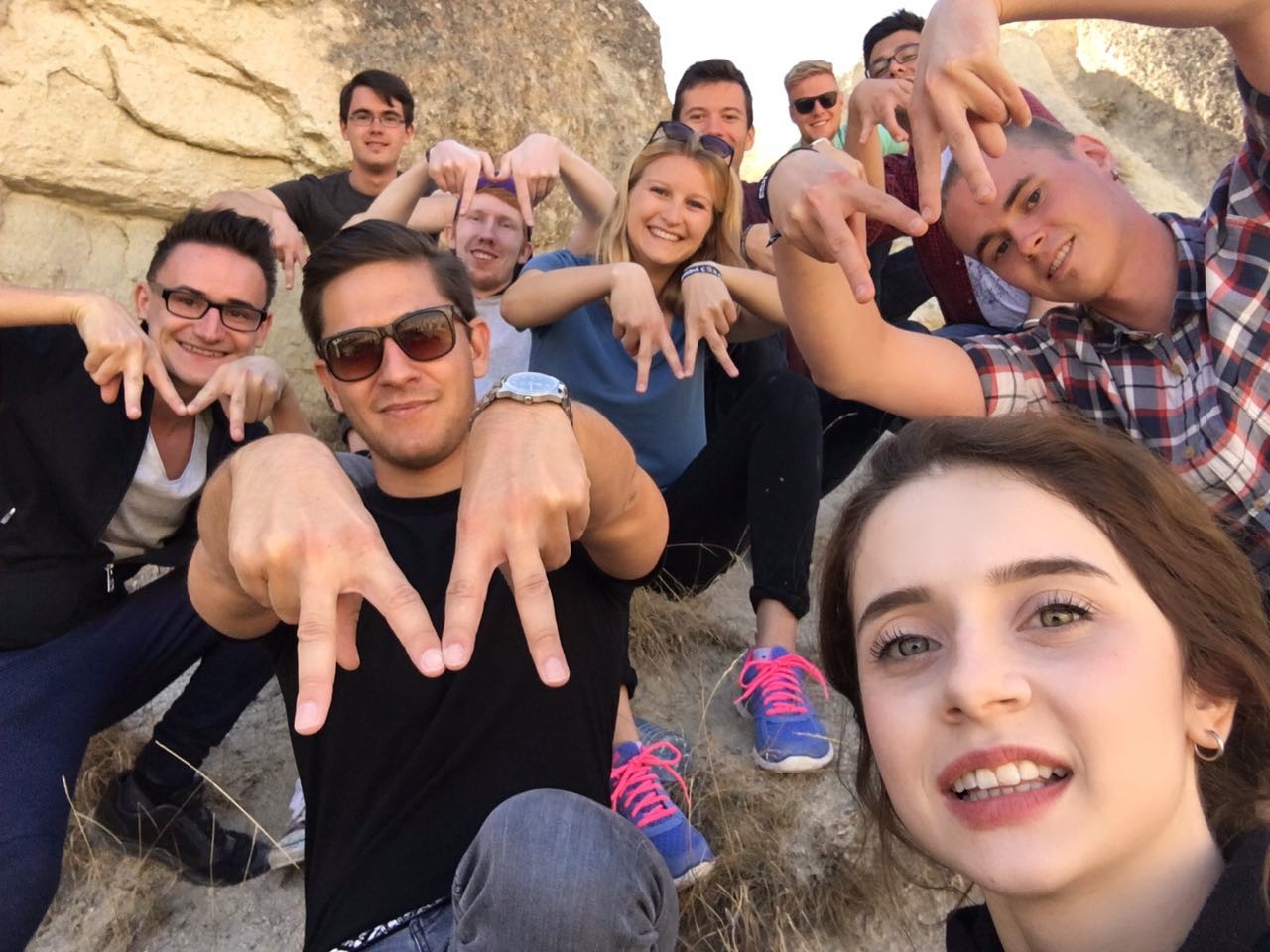 What are the things that you like the most in Turkey as an Erasmus student?

Well, going out for dinner was pretty cheap compared to Germany, even if it is probably expensive for Turkish people. From another perspective I enjoyed meeting with Turkish students and talking to them about their opinion regarding various issues. It was quite nice to see a different point of view, or it was surprising how equal young people are and how equally they think.

What are the advantages and disadvantages of Istanbul?

Advantages are the mixture of the cultures, where you can see western, but also, let’s say, traditional values in relative peaceful coexistence. Furthermore Istanbul is a city that can offer you something new everyday if you’re curious enough and drop your daily routine or leave your comfort zone. The disadvantages is the obvious huge gap between wealth and poverty, also that the city is sometimes too noisy and it is hard to find some relief.

“Due to the kind and helpful people I met in Istanbul, problems were solved in a short amount of time.”

What are the difficulties you encountered and the happy moments you experienced during the program? Can you tell us a memorable moment you went through?

There were no real difficulties, or as Turkish people would say it “problem yok”. Due to the kind and helpful people I met in Istanbul, problems were solved in a short amount of time. I never encountered a real life changing moment, which could be described as memorable. But in my opinion, every day here in Istanbul during my Erasmus semester provided a small part, resulting that I really like to remember the time spent here.

How did Erasmus in Turkey change your life?

In general those questions are hard to answer, because we don’t know how the experiences had will affect our lives in the future. However I would say that I got more open-minded for different cultures, but also the similarities the young people are sharing. I also appreciated to see that western lifestyle and middle eastern one, can go hand in hand, if everyone is accepting the freedom of choices of the other.

Did the Erasmus Program meet your expectations, why do you think so?

I am really satisfied with my Erasmus semester in Istanbul. I became friends with some really nice people (Erasmus and also Turkish) and I hope that the friendship will go on after Erasmus. Regarding educational matters, I have absolutely nothing to complain about. To sum it up private and professional life were both good, so I guess Erasmus was really good 😉

“Leave your comfort zone and try out something new, go big or go home!”

Do you have any recommendation for those who are planning to attend Erasmus in Turkey?

Leave your comfort zone and try out something new, go big or go home! Be curious and explorative and then you won’t be unsatisfied. Also be more easy going in Turkey, especially if you are from Germany, where you are used to follow the rules by word.

Tell us why the others should choose Erasmus in Turkey!

It’s the same for every other Erasmus destination. Get to know a different culture, which is probably also sharing a lot of similarities with your own. Here in Turkey, visit a country that is in a change and hasn’t decided for which direction it shall head.

Please complete the sentence: I love Erasmus in Turkey because …

You can see beyond one’s own nose!

One thought on “Benedict Flaig (Universitat SIEGEN) to Marmara University(Turkey)”